The importance of the humble baguette – Part 1 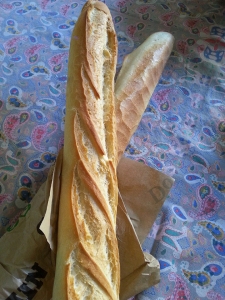 I never knew, before I came here, how important la Baguette is to the French. For example, my mother-in-law gets panicky if, during dinner, she notices that the bread is disappearing too fast, like say, the kids are gobbling it up… She may even start to horde it a bit. She wants to be sure there is enough bread for her breakfast the next morning. She toasts baguettes and slathers them with confiture for her petit dejeuner…So, after dinner, she wraps the leftover bread in a tea towel to keep it for the next morning and then she doesn’t have to run to the boulangerie in the morning. But it’s so important, she will get really bent out of shape if there is no bread. It’s just funny – because in the USA,  a lot of times I had no bread, or if I ran out of bread – I would just eat something else…I really didn’t care…. But here its like “le pain!! Le pain!!! Il faut du pain” Pas de pain equals the end of the world!!! My husband as well… It’s like you can’t have a meal without “ le pain”… I can remember literally us all sitting down and starting to eat a meal,  and his realising there was no bread, leaving the table and the house to go get a baguette for the meal…. To me, it’s like – hey the food is hot, let’s just eat! Who cares if there is no bread. But then…. I’m not French!!

Before I moved to Paris, I wondered if everyone walked around with a beret on their head and a baguette under their arm. Of course that is a stereotype – but the part about the baguette is not that far from the truth! Baguettes are so quintessentially Parisian and so ubiquitous!

When we are “à table”, my family often play the game “Guess where the baguette was purchased?”. There are so many bakeries everywhere and all the baguettes are ever-so-slightly different. Now I can pretty well tell the difference between all of them. I have become a bit of a connoisseur. We even have nicknames for all the closest Boulangeries so after we taste, we call out  “Rue Hébert!”  or “Près du station BP!”, “La Fourche!”,” Rue Lazare Carnot!” or “ A côté de l’école!” Everyone in the family has their favourite.

This entry was posted in French culture, Only in France !, Stephanie. Bookmark the permalink.